AP: Sacaton, Arizona (October 2020). Later this week, more than 275 former and present employees of the Pima-Maricopa Irrigation Project will gather in this tribal capital city of the 45,000 member Gila River Indian Community. Twenty-five years ago this Wednesday P-MIP was charged by the Community's governing Council to design, construct, operate and maintain the 2,400-mile irrigation system. It includes 25 miles of underground pipeline and 57 miles of open mainstem delivery canal. The remainder consists of canals and laterals that actually deliver water to 146,330 acres of agricultural land. Five regulating reservoirs and a fully automated, state-of-the-art control center manage the system.

The entire 2,400 mile P-MIP irrigation system is controlled from the
Project control center. P-MIP monitors and controls the delivery of
more than 653,000 acre feet of water each year. The control center
is located next to the award winning Huhugam Heritage Center.

On Thursday, the P-MIP group will have the opportunity to operate the irrigation control center located at "Three Lakes," near the Community's award winning Huhugam Heritage Center. The automated irrigation system both conserves water and maximizes production. In all, up to 653,000 acre-feet of water is channeled through the system each year. The water not only sustains the agricultural economy of the Gila River Indian Community but it also meets the needs of the Community's municipal and industrial water users.

Current and former P-MIP employees will gather at Wild Horse Pass Resort this Wednesday evening to celebrate 25 years of success. They will be treated to a traditional dinner of tepary beans, roasted corn and tortilla soup. These traditional foods, all of which were grown by individual Akimel O'otham and Pee Posh farmers, have played an important role in reducing the high rate of diabetes that once plagued the Community. Other native and traditional foods - both cultivated and those growing naturally - are being used in medical research to help reduce the chronic health challenges within the Community. The Southwest Native American Research Center assisted in restoring many of these traditional and medicinal plants and herbs. Part of its purpose is to expand the seed bank of these crops for wider distribution in the greater Southwest and Northern Mexico borderlands. The central research and seed bank repository has been located in the Community for the past 10 years.

On Friday, the Gila River Indian Community will host a picnic for former P-MIP employees at the Blackwater Riparian Habitat Recreation Area, one of seven created by P-MIP to simulate the historic flow and ecosystem of the Gila River. Community members use the riparian areas extensively today. After the picnic, P-MIP staff will take a boat tour of "Twin Buttes Lake," one of the regulating reservoirs connected to the recreation area. Conservation and wildlife groups from around the world visit the Community's desert riparian ecosystems, some of the last to survive in the southwestern United States. They are particularly renowned for the variety of wildlife and fish that now call them home.

Riparian areas have also restored a new sense of pride in traditional crafts. Scores of native plants, such as cattails, devil's claw and arrow-weed, now grow in abundance. In turn, this has increased the number of Community artisans making traditional crafts. Many of these are sold at the Huhugam Heritage Center. While a repository for archaeological and cultural artifacts of the past, it is also a place where the Community showcases its modern history and culture. Pee Posh pottery and Akimel O'otham baskets are just two crafts available at the Heritage Center.

Farmers for millennia, the Akimel O'otham and Pee Posh were deprived of Gila River waters in the 19th century, severely crippling their economy. Today, with a firm supply of water secured through a long, complicated settlement process, the Community has not only restored its agricultural heritage and self-sufficiency, but has also once again become the "Breadbasket of Arizona." Growing a variety of native, traditional and commercial crops, Community farms, corporate farms and individual Indian farmers now cultivate a cornucopia of fruits, vegetables, small grains and other crops such as cotton, alfalfa and potatoes. Community members engage in more than 60% of all agribusiness activities within the Community, with individual Indian family farmers representing 15% and outside corporate agribusiness interests constituting 25% of the agricultural mix. A number of cooperatives and partnerships between Community farmers and outside groups also exist. 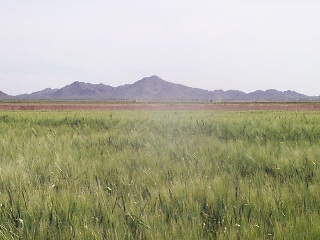 The Gila River Indian Community has once again become
the "Breadbasket of Arizona." Community farmers market
cereal grains throughout the country.

Aquaculture has also expanded throughout the Community, with more than 3,500 acres of land now devoted to it. Community aquaculture has restored culturally important fish such as the Colorado Pike minnow and the Razorback Sucker and introduced fish such as tilapia that are commercially marketed throughout the Southwest. Aquaculture, including fish rehabilitation and restoration, allows the Community's precious water resources to be used for fish production before it is applied to crops. This double use of the water supply allows fish farmers to produce millions of pounds of fish and shrimp annually. Millions of dollars are brought back into the Community through its aquaculture endeavors. A combination of Community agriculture and aquaculture - including the secondary and tertiary businesses generated by them - has created more than 5,000 new jobs for tribal members. The high acreage, excellent soils, firm water supply and ideal climate have created near-perfect conditions for a thriving agriculture and aquaculture-based economy that has stimulated the overall economic and social vitality of the Community.

The urbanization of most of Arizona's agricultural lands, combined with a good quality and firm supply of water - and a streamlined leasing system initiated by P-MIP, has also created a lengthy list of commercial farming enterprises waiting for long-term agricultural leases in the Community. The premium lease rates, combined with the many jobs created for Community members in the crop processing, packaging and marketing enterprises, as well as agriculture support services, resulted in agriculture outstripping gaming as the Community's top economic source in 2018.

A vibrant farm economy has also stimulated a growing cattle and dairy industry within the Community. Tribal and individually owned dairies, feedlots and ranches now produce products that have a ready market just minutes away. Community alfalfa, cotton and grain producers market significant portions of their crops to livestock and dairy producers. These producers today maintain some of the most productive herds in the state. In addition to domesticated herds, many species of native wildlife have also been restored. Community River Resource Management Areas and riparian habitat recreation areas are today home to dozens of species of wildlife.

On Saturday, the P-MIP group will tour a number of Community farms growing native and traditional foods. Some of these are being commercially grown for the first time in over a century - and they are being produced in large quantities. This not only has helped improve the overall health conditions of the Akimel O'otham and Pee Posh but it has also stimulated a market for these foods among Indian nations within the greater Southwest. Community farmers also grow a variety of grain and forage crops that are marketed to other cattle-producing Indian nations in the region.

What newfound economic and social vitality have not done for Community pride, improved education and job training have. As the Community restores a modern version of its traditional and culturally based agrarian economy, it has been able to improve existing social and educational services and opportunities. Better education means Community members are able to secure better paying jobs and move into management positions. Some members have opened grocery stores, gas stations and other businesses. Others are now involved in marketing agribusiness commodities, such as tractors, farm machinery, fertilizers, seeds and crops. An increased standard of living has resulted, leading to the construction of thousands of new homes for Community members and the development of new residential areas across the Community. This is a direct reflection of the early creative planning of P-MIP, which minimized the conflict of Community housing and agricultural development. Using its own Memorial Airfield, the Community now exports its goods and services to worldwide markets. Tourism beyond the resort, casinos and Heritage Center has also blossomed, as people from around the world have made Gila River a destination of choice.

In just twenty-five years, the Gila River Indian Community has experienced phenomenal social, cultural and economic change. A diversified agricultural economy has been restored. Transportation corridors have been created, making Community products easily accessible to world markets. A secure and firm share of the water has benefited agricultural users as well as municipal and industrial users.